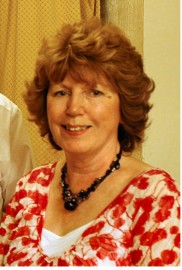 Mrs Grês Pritchard is the musical director of the Foel Male Voice Choir.

She is also the accompanist and deputy conductor of the Traeth Male Voice Choir and the musical director of the Ladies Choir – Lleisiau Llanerch (Voices from the Glade).

Grês is a native of Penysarn, Anglesey. She began to play the piano at the age of five.

Gaining the A.L.C.M. and L.L. C. M. Diplomas by the time she reached the age of sixteen.

She became a Student at The Normal College, Bangor, specialising in Music for her Teaching Certificate.

Since leaving the College she has taught young children in several local primary and secondary schools.

Her abilities as an accompanist have made her much in demand at many of Welsh festivals including The Royal National Eisteddfod of Wales.

In 2006 she was presented with the prestigious ‘Order of the White Robe’ at the Royal National Eisteddfod of Wales for her musical achievement as a teacher.

In 2010 she was awarded the MBE for her contribution to music on Anglesey.